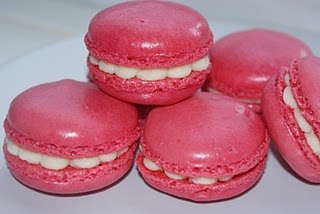 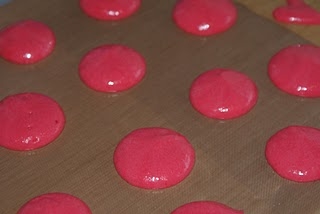 Make up the white chocolate buttercream.  Beat the softened butter.

Sift in the icing sugar and beat together well (without covering everything in a cloud of icing!) 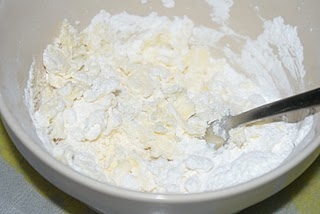 See I’m making mine by hand – that must be a first.

Add in the tablespoon of double cream to help it come together.

Take the white chocolate, break into small pieces and melt. 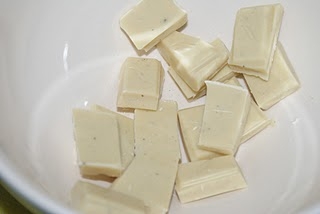 A microwave will do the trick if you don’t fancy doing it over a pan of hot water.  Short 30 second bursts on half power for white chocolate, stirring in between to make sure it doesn’t overheat and burn.

Add the melted chocolate to the buttercream and mix well. 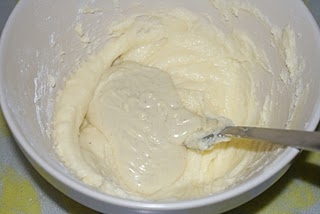 Leave to stand at room temperature for a couple of hours or half an hour in the fridge and the mixture will thicken as the chocolate cools.

Now to make the raspberry filling. 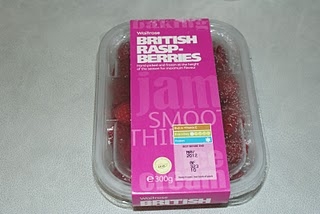 Add the raspberries to a pan.  If you’re using frozen berries there’s no need to defrost them first.

Add the sugar and the water and place over a low heat. 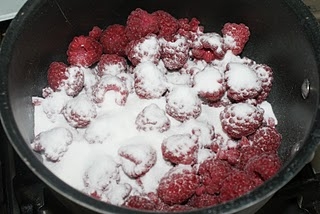 Stir regularly and as the raspberries soften mash them down with your spoon. 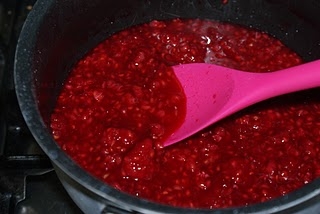 Continue heating until the mixture is very mashed up and liquid.

Place the cornflour in a small bowl.  Take a couple of spoonfuls of liquid from the pan and add to the cornflour.

Mix to a smooth paste. 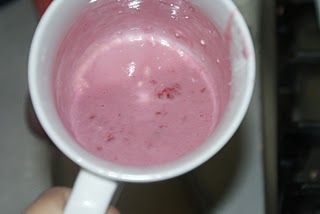 Add the cornflour mixture back to the pan and stir well- this will stop you getting any lumps.

Continue to heat until the mixture thickens nicely,  this will probably take about five minutes.

Now you will need to sieve the raspberry sauce to remove the seeds.  Take off the heat and mash through the sieve to get as much raspberry sauce as possible.  Be careful it’s hot! 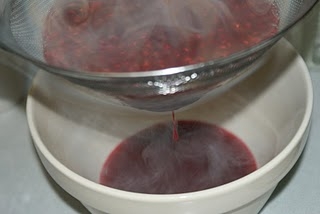 The sauce will thicken as it cools down but if you feel it is too thin place it back in the pan and heat for a little longer until you achieve the right consistency.

And last but not least if you’re still not happy repeat the cornflour process adding another tablespoon to help it along the way.

Place in a bowl and allow to cool. 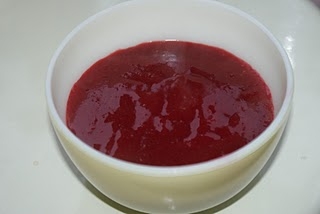 Place a clean tea towel on your worksurface, folded in half.  This will give the Mac’s something soft to sit on.

Match them up in similar sizes with a top and a bottom.

Prepare the fillings.  I like to pipe the buttercream using a piping bag and an icing nozzle, the raspberry sauce is going in a squeezy bottle. 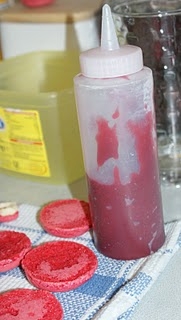 These things are purely aesthetic (and probably me being a bit daft) the taste is exactly the same no matter how the fillings get inside.

Pipe small balls of buttercream around the outside edge. I’m using an icing tip no. 43, a small star tip will do the same job.  It’s wide enough for the buttercream to come through and gives a lovely lined effect.

Fill the centre of the buttercream with raspberry sauce. 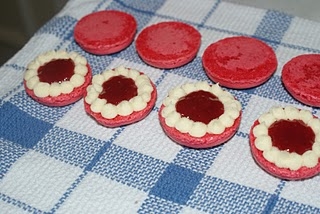 Add the tops, pressing them on carefully. 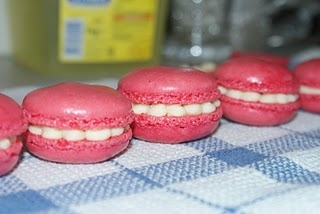 (I have to say I can’t look at these without thinking they look like pairs of false teeth – what with that and the last pale pink ones looking like boobs I really don’t know what’s going on inside my head!)

This entry was posted in Chocolate, Macaroons, Raspberry, Treats. Bookmark the permalink.