Based at the Burare District Health Centre community health workers walk out across the countryside to visit families with children that have been identified by the clinic as malnourished.  They provide them with all important supplementation and support.  We went with them to meet two ladies whose children both suffer severely in different ways from malnutrition. 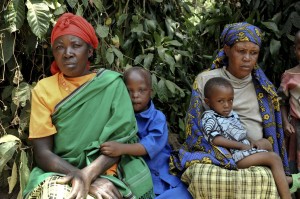 On the left is Immaculate and her daughter Chlaudine,  unbelievably she’s ten.  Malnutrition has stunted her physical and mental growth.  Chlaudine was admitted to hospital as a toddler when her Mum realised she wasn’t doing as well as she should be.  Chlaudine is making good progress and her diet is still supplemented and supported by the programme.  The damage has been done, she will never grown as tall as she should or develop to her full potential.  The stunting which occurs in early childhood irreversibly damages cells and weakens an immune system.

Immaculate told me that she was surprised to hear Chlaudine was malnourished.  She explained that she feels the family does in fact have enough food but that Chlaudine is a picky eater – as a ten year old, is that not her right to be a little picky?  It seems when there is a lack of good nutritious food on offer then being picky is clearly out of the question.

On her right is Leonie and her daughter Mutuyimana who is 3 years old.  Mutuyimana is the youngest of Leonie’s 6 children and the only one of the family suffering from malnutrition.  Leonie is a widow and told me she just doesn’t have enough food to go around. She has a small piece of land in front of her house, no bigger than a double bed.  Understandably she grows her own corn but it is never going to stretch far enough.  Leonie works on the land for the more wealthy inhabitants of her area but still the money she earns is not enough to feed them all.

This lack of affordable nutritious food is leaving 45% of Rwandan children with stunted growth, one of the highest rates globally.

Mutuyimana suffers from wasting as a consequence of her malnourishment, which is probably what most of us imagine from malnutrition. 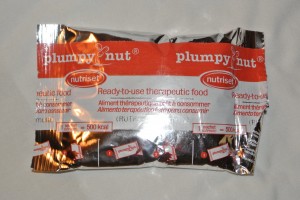 It is packed with fats, carbohydrate, proteins, vitamins and minerals and will aid a rapid weight gain.  It is high in calories and nutritional goodness all packed into a small volume – with small shrunken stomachs it is invaluable.

Despite the difficulties the community healthworkers are continuing to support and supplement both Mutuyimana and Chlaudine and they are both making good progress, the damage to their growth has however been done and that is something they will carry with them forever.

Lots of people came to greet us, these cheeky chappies loved the camera and loved it even more that they could see the picture on the screen straight away! 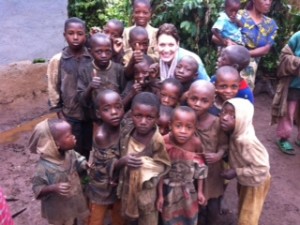 They even had a turn which caused much hilarity. 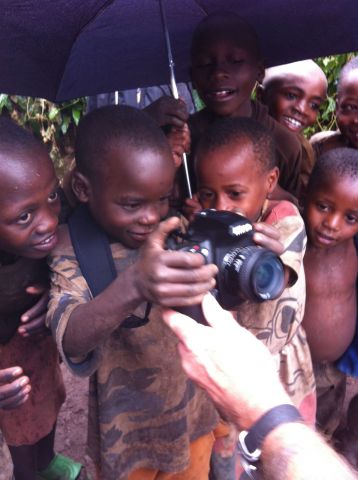 It was tipping it down with rain and we were all super muddy but that didn’t stop them showing off their hoop and stick and footballing skills, they even let me crouch down under their umbrella with them.

Honestly seeing children so happy, having so much fun talking to a mad white lady convinced me no doubt that wherever in the world you are children should most definitely have the chance to grow up to be whatever they want to be, without worrying whether they’ll make it there.

The next visit took us to meet Mum and Dad with beautiful 1 year old twins Patience and Pacific and their eldest daughter Benita,10. 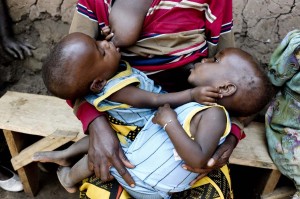 She explained to us that she had previously lost three babies and another was in a rehabilitation centre for mental difficulties.  The twins arrived two months early weighing just 2.2lbs and 3 1/2lbs, she had been working hard labouring in the fields and wasn’t well nourished herself.  Patience and Pacific were both hospitalised and treated for their malnourishment, again with the plumpy nut until they were well enough to come home.

Feeding them well is still difficult for the family and malnourishment is still a major issue.  The community health workers provide them with Sosoma, a fortified porridge which supplement the families diet and they are one of the poorer families who have been given a cow which will help them immensely once she starts to provide milk.

The damage is near on impossible to undo but they are receiving what they need to give them the best chance possible.  I find myself wondering what would have happened to Patience and Pacific if they didn’t live in the Burare District where the programme operates and I think we all know the answer to that question….

Our visit again drew a crowd as many of the local children were returning home from school.  I shared some of my pictures from home with them, their favourites weren’t the boys but the cat which roused choruses of ‘miaow miaow’ and one of the snow made them all jump around shouting ‘brrrr’ and rubbing their arms.  They must have thought I was a nutter! 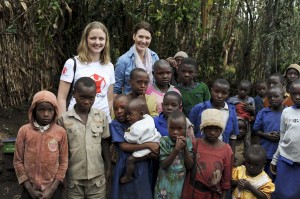 In the front of this picture is Benita, the older sister, holding Patience.

Although meeting these children was heartbreaking, talking to the Mums (through a translator) made me realise we’re all the same, a Mum’s a Mum wherever in the world you are and we all want our children to grow up big and strong without a care in the world.

This is exactly why I agreed to come here and help with the campaign no child was born to die because they can’t get the goodness they need to thrive.

Join us in the global push to end the hidden hunger – .  Pledge your support by naming your own day on the petition here

Save the Children – Name a Day

I’ve still got lots to share with you including a visit to the District Hospital and some great STC projects that are doing fantastic work, more soon