Just a quick post to let you all know that I will be appearing in the one off special
The Great British Wedding Cake – Wednesday 20th April 8pm BBC2
alongside Edd Kimber and Miranda Gore-Browne, just like old bake off times!
Hope you’ll tune in and set your sky plus boxes to record. 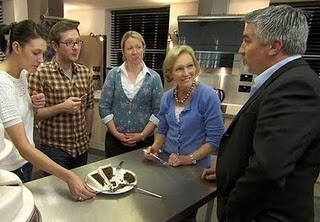 ‘Renowned baking writer Mary Berry and professional baker Paul Hollywood explore the history of the Great British wedding cake. They look at its dramatic change through the eras, from the earliest Tudor creation and the extravagant Victorian period, to wartime Britain, the affluent eighties and the present day.Mary and Paul also set the ultimate challenge to the three finalists from 2010’s Bake Off, to make and bake two spectacular wedding cakes each, one traditional and one contemporary, in just 16 hours.’BBC

This entry was posted in Cake, Ruth's Chat, The Great British Bake Off, Wedding. Bookmark the permalink.