There’s been a lot of you asking for me to do a surprise cake tutorial on the blog after seeing the birthday cake I made for my eldest.  If you didn’t see it here it is – a giant green skittle hiding a ton of skittles inside. 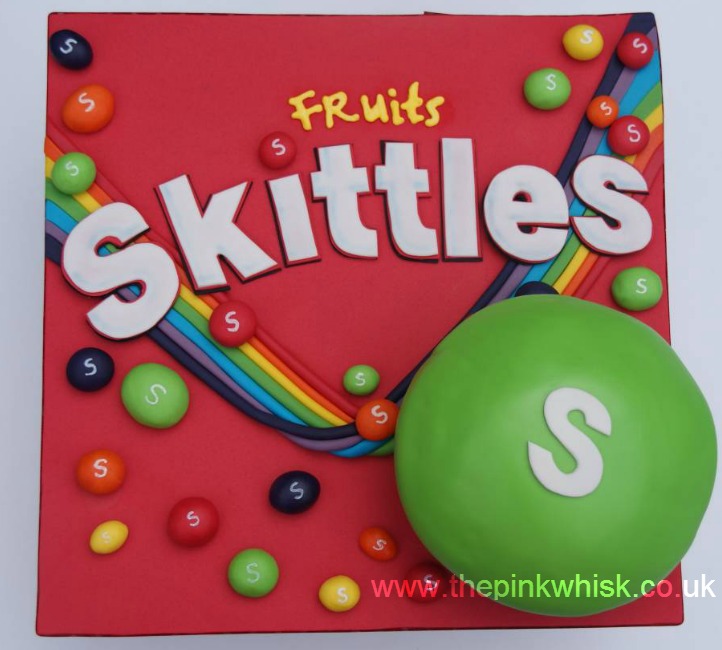 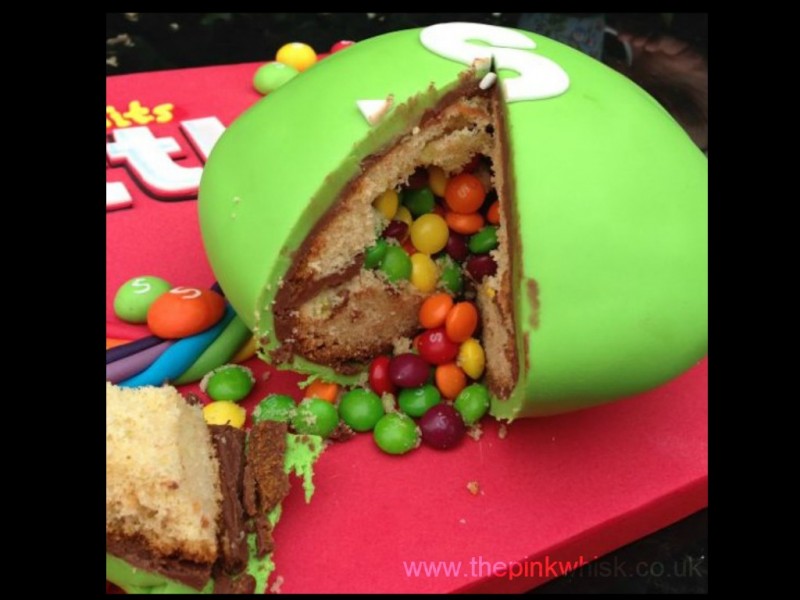 I will be doing a sweetie surprise cake for you next week but for now I thought I’d go with an easy peasy summery version!  Victoria Sandwich Surprise Inside Cake – of course you can use any kinds of fresh fruit you prefer if you have an aversion to strawbs.

Teaching my Grandma to suck eggs?  I’m going to run through making a Victoria Sandwich anyhow!

Cream together the butter and sugar.  Yes I know you cream it but are you REALLY creaming it?  You need to be looking at 5-6 minutes with an electric mixer for super fluffy light creaming.  This is really important in getting a sponge that rises well and is light and fluffy in texture. 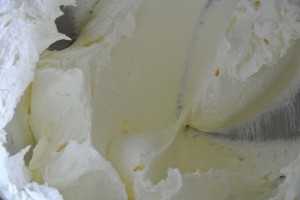 Fully creamed?  Right let’s go!  Add the vanilla and beat it in well.

Crack the eggs into a jug and beat them with a fork.  Now the trick is adding a small amount at a time, probably 1/3rd to ½ an egg each time.

Beat the mixture really really well until it’s consistency is back to the light and fluffy creamed consistency before adding any more egg.  Doing it slowly is the key.  Don’t add too much and turn your mixture to soup.  After each egg addition beat it back to light and fluffy without a trace of liquid. 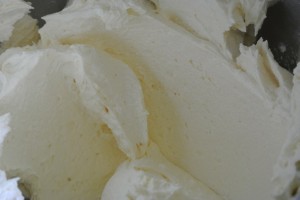 Keep going until all the egg is in and voila, eggs all in and not a sign of curdling!

In goes the flour and the milk, now fold it together.  You don’t want to be beating it at this stage otherwise your sponge will end up with big holes. 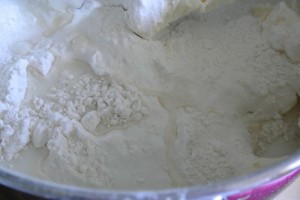 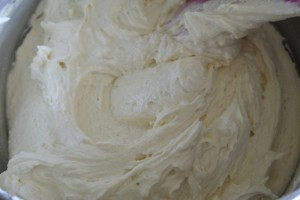 Grease and line the bases of 3 x 8” sandwich tins.  Don’t worry if you only have two, the mixture will be happy to wait in the bowl until the first ones have baked.

Split the mixture into 3 and roughly level with the back of a spoon. 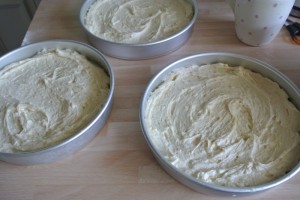 Bake in the oven for 25-30 minutes (depending on how many you put in the oven in one go) until light and springy to the touch, golden brown on the top and just starting to shrink away from the edge of the tin. 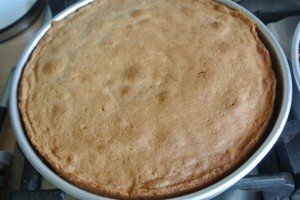 Allow them to cool in the tins for 5 minutes before turning out onto a wire rack to cool fully. Now to prepare the cheesecake cream, I think I may be in love with this stuff!

Beat the icing sugar into the cream cheese until fully incorporated.  Don’t overmix it though, that’s what will turn cream cheese runny. 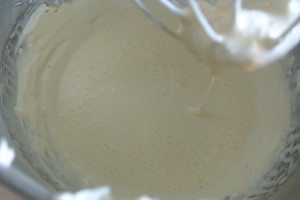 Whisk the mixture now to whip the cream until the texture is thick. 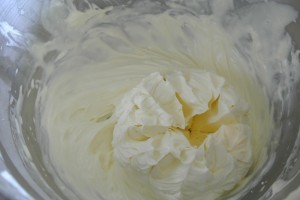 Add the diced strawberries and fold together. 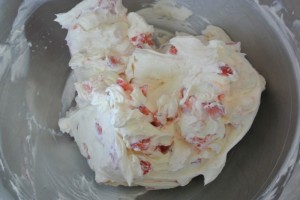 Store this covered in the fridge until it’s time for the assembly.

Wash and dry the strawberries for the surprise inside.  If I had my time again, I’d hull them too.  It’s up to you, the children made a pretty mess eating them when I served it.

So to assemble – one cake on your serving plate. I’ve added the cheesecake cream to a piping bag and snipped off the end just for ease but you can do it with a palette knife or spoon if you’d rather. 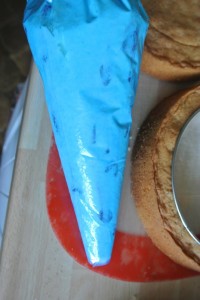 Add a layer of the cheesecake cream in a circle 1” around the outside of the cake. 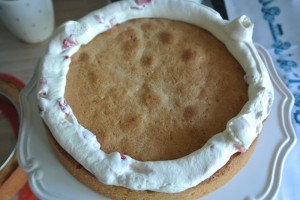 Cut out a 6” circle from the centre one of the cakes.  If you don’t have a pastry cutter that size a sharp knife will do the trick. 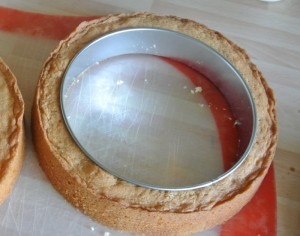 Leave the cutter (if you have it) inside the cake and remove the centre.  Lift it over onto the cake and place in position before removing the cutter.  This gives it some strength and will stop it breaking.  If you don’t have the cutter support it well over 2 palette knives or a fish slice. 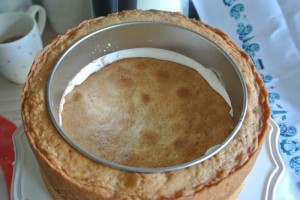 Now fill the centre with your fruit – level with the top. 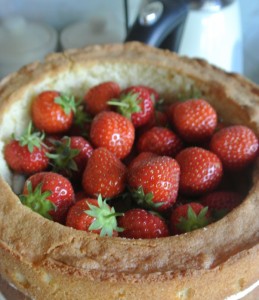 Add another layer of cheesecake cream and top with the last cake. 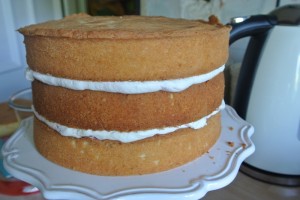 Dust with icing sugar and add a few extra strawbs for decoration.  Put the remaining cheesecake cream into a small bowl and serve at the same time as your cake. 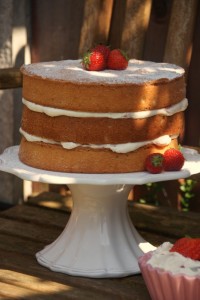 This is best assembled just before serving but won’t mind being in the fridge for a few hours if necessary –  be sure to cover the cake before putting it in the fridge so it doesn’t dry out, let the cake come up to room temperature before dusting with the icing sugar and serving. 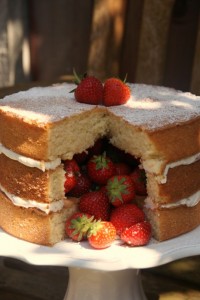 This entry was posted in Cake, How To, Treats. Bookmark the permalink.