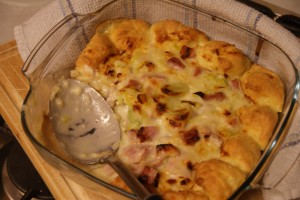 Sounds fancy, it’s not (you know me better!)  This makes a great family tea, a change from pie and casserole but still with that give you a great big hug hearty winter meal!  This is Mum’s recipe, but I’ve fidgeted about with it of course – here’s hoping she doesn’t mind too much.

250g cooked ham, gammon or chicken – ad hoc use what you prefer, even more veggies if you like, this is a use up your left over roasts, chuck it in and it’ll taste great

Serves 4 when accompanied with veg!  Feel free to halve the quantities throughout if you’re not catering for a family full of hungry boys or girls.

First make up the white sauce.

Melt the butter in a pan.

Once melted add the flour and stir through well. (Do I always use a Pink Whisk – well…Yes!) 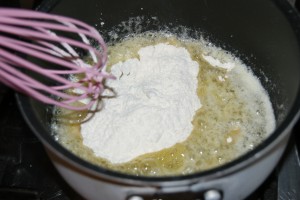 Add a little of the milk and mix to a fairly liquid consistency. Then add the remainder of the milk. 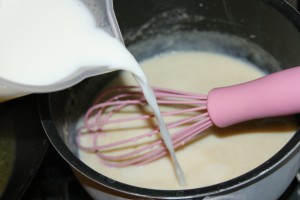 Still on the heat, stirring occasionally bring the sauce up to a simmer.  The sauce will thicken as it heats.  Remove from the heat when it resembles a runnyish custard.  Set to one side. 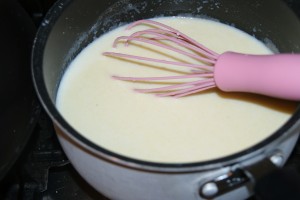 Add the butter for the leeks to a large frying pan and melt.  Add the sliced leeks to the pan and sweat until softened. 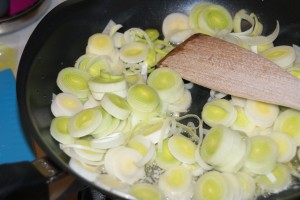 Add the cubed ham and then pour in the white sauce.  Heat the mixture through until piping hot, the sauce will continue to thicken slightly.  Season with salt and pepper to taste.  If you’re using gammon then go slowly with the salt!  Remove from the heat and set to one side. 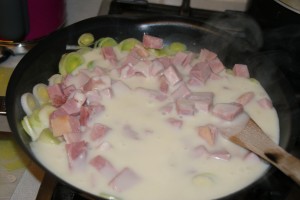 Now for the gougere, which is in fact a savoury choux pastry.

In a pan (another one – this is one night you need someone else to do the washing up!) place the water and the butter.  Heat until it comes to the boil. 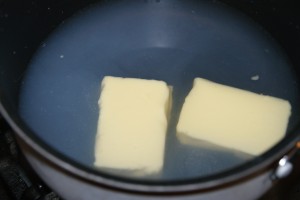 Remove from the heat and add the flour, mustard powder, vegetable bouillon powder and beat well.  It should be a really thick paste, that you need strong arms to beat with a wooden spoon. 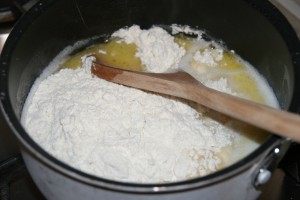 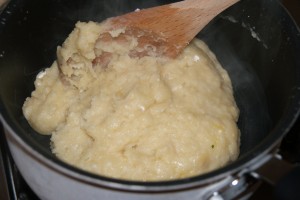 Add the eggs one at a time, beating well after each.  It seems like they’re never going to mix in – but they do! 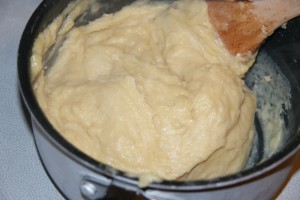 Once all the eggs have been incorporated, add the grated cheese and stir well again. 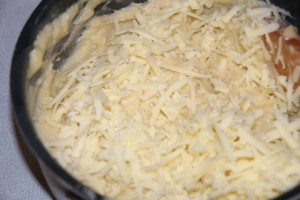 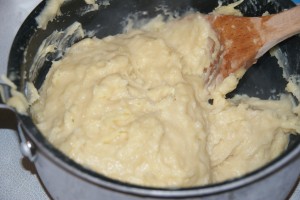 Now for the assembly! 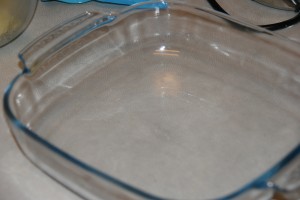 Lightly grease around the outside edge and the base where the choux will sit.

Using normal cutlery spoons dollop the gougere around the outside edge of the dish. 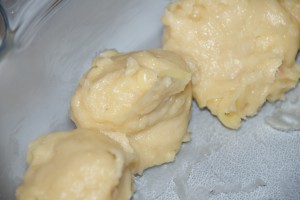 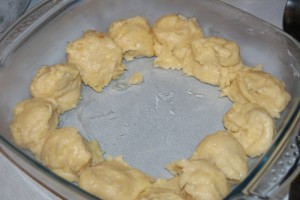 Once you have completed the full circle add the filling to the centre. 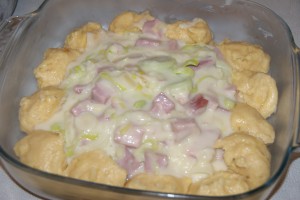 If you have left over gougere, grease a baking tray really well and dollop on spoonfuls of the mixture.  These need to be baked at the same temperature for 20-25 minutes until puffed up and golden.  If you’re not serving the extras right away remove the from the oven and slit the sides to allow the steam to escape and allow to cool on a wire rack.  These can also be frozen for use at a later date.  Mum serves this up with a roast instead of Yorkshire puds and I love them (and still have to fight my brother for the last one!) 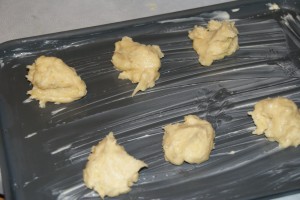 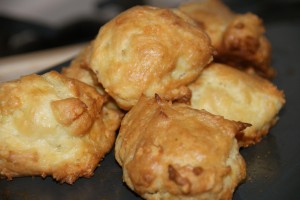 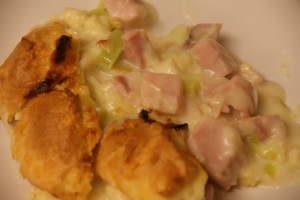 This entry was posted in Cheese, Choux, Pie, Savoury. Bookmark the permalink.