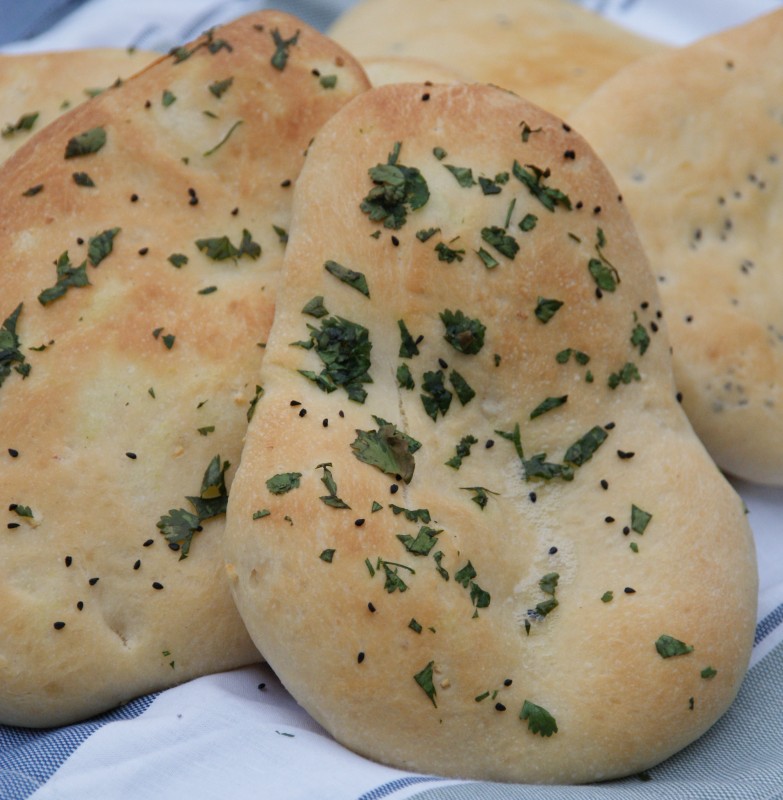 I love making these when I have the time,  you can’t beat curry night in our house with homemade Naan bread.

Place all the dry ingredients into a large mixing bowl. 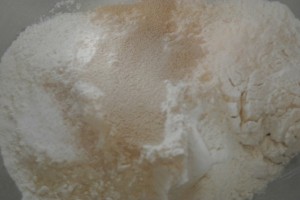 Now measure the milk and the yoghurt into a jug.  I’ve given weight measurements for them too, just so we’re accurate!

Whisk the two together.

Now to get these Naan on the go we need to warm through the milk and yoghurt,  30 seconds to a minute in the microwave if you have one will do the job, otherwise heat them gently in a small pan until they’re lukewarm. 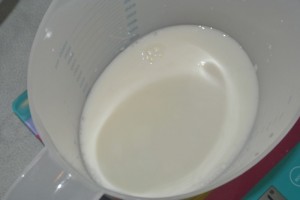 Add the tablespoon of oil plus the milk/yoghurt to the dry ingredients in the bowl. 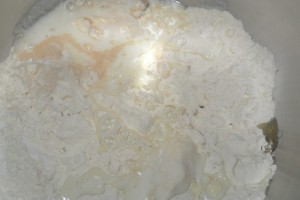 How you mix up your dough is entirely up to you, by hand in the bowl, a spatula or in the mixer – mix it up to a rough dough. 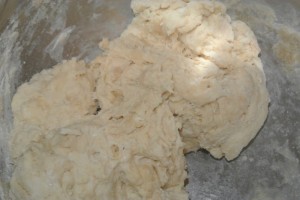 Onto the kneading – 10 minutes by hand (or in the machine) until it’s lovely smooth and elastic. 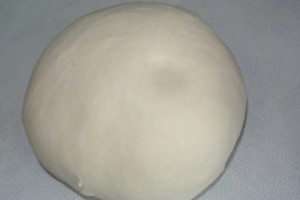 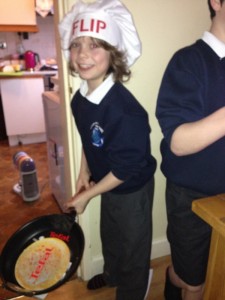 Why on earth was my Kenwood on the floor.  Its a very simple reason,  if you can’t stand by the mixer whilst it kneads your bread dough, it has to be somewhere safe.  Writing a bread book has meant the good old Kenwood has spent some time down there!  For the most part mixers don’t walk across the worksurface, but when they do boy do they go at a fair old march.  So the mixer goes somewhere stable where it’s not going to take a death dive off the counter top!

Add a little oil to the base of a clean bowl. 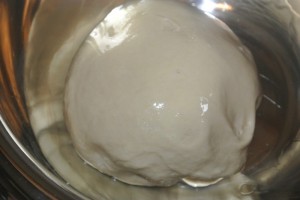 Pop in the dough and turn to coat it in the oil.  Cover the bowl over with clingfilm or a clean tea towel and bob it in a warm spot to rise until doubled in size.  This should take about an hour but remember if it’s in a cool place it will take much longer. 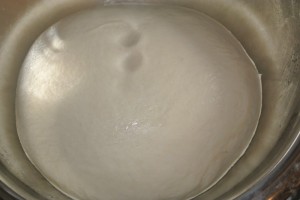 Doubled in size, tip out the dough onto the worksurface, knead it very lightly then pat it out into a rough flat shape. 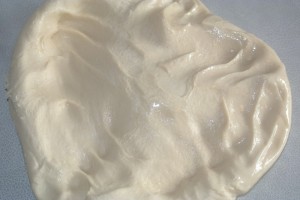 Sprinkle over the seeds. (If you prefer these can be left out completely) Gather the dough up around the seeds and knead until they’re well distributed through the dough. 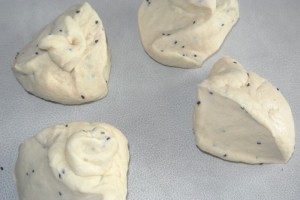 Using a rolling pin, flatten each one out into a rough round shape.  When shaping dough it’s best to do it slowly, giving the dough time to relax between each stretching.  Try and do it all in one go and the dough will fight you, springing back to the position it wants to stay in. 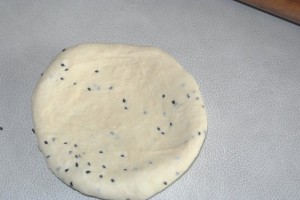 Shape all 4 pieces into rounds, and then begin to stretch them – by hand or with the rolling pin, into a more oval Naan bread shape. 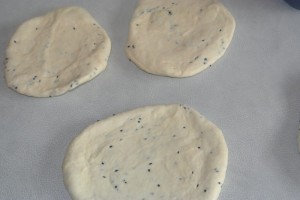 Now prepare 2 baking sheets,  if you don’t have flat sheets use your baking trays turned the wrong way up so that the lip sits underneath.  Line them both with a sheet of baking paper or a reusable baking liner. 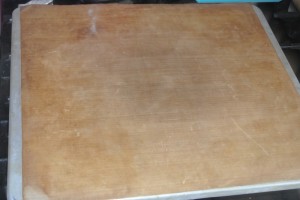 Set 2 Naan bread onto each tray, stretching the dough into it’s final Naan bread shape as you do so. 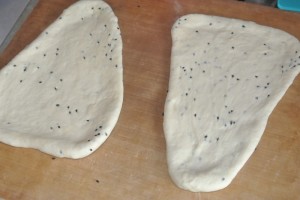 Cover both trays over again with clingfilm or clean tea towels and pop them in the warm spot again to rise again for half an hour.

Preheat the oven to 190c (fan)/210c/Gas Mark 7 slide one of the liners with the Naan bread on off onto the workstop and place the tray (still upside down) onto the shelf in the oven to preheat at the same time too.

So the oven is ready, the baking sheet is hot hot hot in the oven and the Naan have puffed up nicely, we’re just going to bake one sheet (2 Naan bread) at a time. 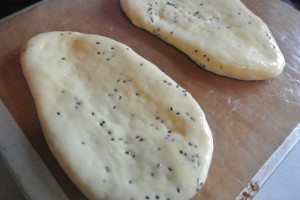 Now take the hot tray out of the oven and quickly (but carefully) slide the sheet of 2 Naan onto it and pop it straight back into the oven to bake for 8-10 minutes until lightly golden brown. Wrap the baked Naan bread straight away in a tea towel to keep warm  and bake the 2 remaining Naan in the same way brushing first with melted butter.

If you want to make them in advance wrap them in the tea towel as soon as they come out of the oven and allow them to cool fully in there.  Once cooled they can be popped in a freezer bag or wrapped well in clingfilm and frozen until you need them.  Simply defrost them fully, sprinkle on a little water and refresh them in the oven (again at 190c) for 2-3 minutes before serving.

For the garlic and coriander version the method is exactly the same but add the crushed clove of garlic to the dry ingredients when first making the dough. 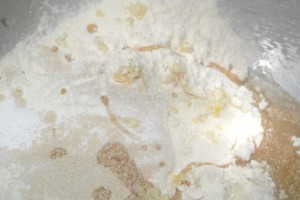 The added garlic will generally slow down the rise, so allow a little longer for the first rise in the bowl and once the Naan are shaped.

Add the chopped fresh coriander to the tops of the Naan once you have brushed them with the melted butter just before baking. 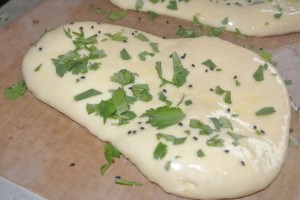 I can feel a curry night coming on! 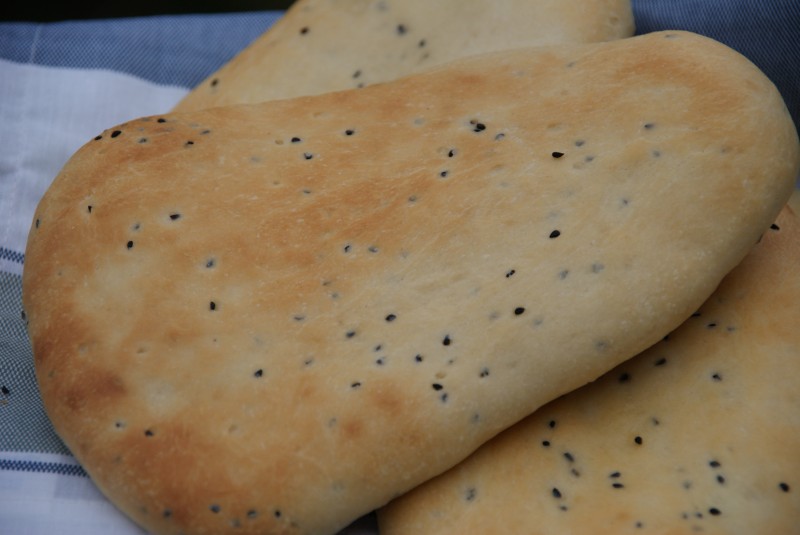 This entry was posted in Bread, Egg-free, Savoury. Bookmark the permalink.